Automatic control of each deals. Rating of managers.

Set your own rules – the robot will check the execution. Effective management of the sales department.

The Nemind application analyzes the data of Bitrix24 and amoCRM, evaluates the achievements and problems of working with each client and writes the result to the custom fields of the deal.

To assess the work of the sales department, conversions between statuses, overdue tasks, calls over X minutes, and many others are used. Additionally, you need to consider the funnels and types of customers. How not to get lost in the sea of ​​numbers and use information efficiently and simply?

Replace all parameters with one quality parameter and watch it grow!

In the customer card 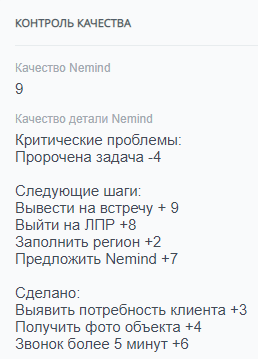 The manager sees which actions will increase the rating of the deal, and therefore his PERSONAL rating. In the example, he should close the issue with a delay and think about whether he can go to the meeting and to the decision maker.

Nemind Quality is a custom field of type “count” that allows you to sort or filter the best and worst deals using standard CRM tools.

Summary analytics will show the best and worst managers in terms of CRM management. Double-click on the cells to go to specific deals with achievements or problems.

The assessment of each deal and the average quality ratio by managers creates a sporting interest in better CRM management and simplifies the manager’s control. The manager knows exactly what is required of him: what information needs to be clarified and recorded, what fields to fill in, how to communicate with clients correctly.

For each deal, the robot recommends useful actions that increase its rating. It is enough to follow the advice and choose those tasks that will give the maximum increase in the average rating – they will be the highest priority.

Forget persuasion and threats. No more repeating the same thing to everyone. Do you want managers to offer customers additional services? Add them to the rating – that’s enough.

Let’s compile a list of critical and recommended actions: which fields need to be filled in, how many calls to call, write, complete tasks, etc. We put a priority point for each item.

Once a day, the robot will check each trade, give an overall assessment of its completion and indicate what steps need to be taken to increase the score.

The quality rating arouses sports interest among managers and they begin to follow the “digital regulations”. The manager spends much less time on the control of work – now the robot is engaged in the routine.

Step 1. Description of problems, requirements and wishes for maintaining CRM 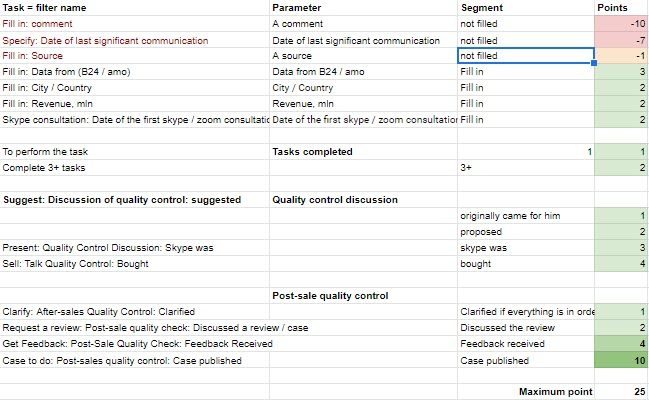 The screenshot shows a real table with parameters for quality control of Nemind managers. Some of the parameters have been removed for convenience, in fact, the table is larger. This is our case, for each business the set of parameters will be different. You can use a variety of options: from simple ones, such as filling in a custom field (for example, the date of a meeting with a client), to complex ones – you can increase the points for a deal having at least one call over 100 seconds.

Let’s take a closer look at the example: the first column contains the “task” for the manager, this text will be in the card of the deal (client), for convenience we recommend starting tasks with a verb in an incentive form: “Fill in”, “Specify”, “Specify”, etc. etc. Note: this is not a standard CRM “task”, but a “checklist”, a “slider” that the manager writes for all deals at once. This list “digitizes” the thoughts of the leader, formalizes the goals. In the second and third columns, “Parameter” and “Segment” we indicate the data, on the basis of which we check the completion of the task.

The first criterion “Fill in a comment” has a point of -10, this is a critical parameter, according to our rules, a comment must be filled out. In the commentary, we write the answer to the manager’s question “what’s with the deal?” The date of the last significant communication is the date when the customer showed interest the last time and is filled in the custom field. Sometimes the client begins to actively communicate, although the deal was created six months ago or more, and we understand this field, which clients are the most relevant. Unfortunately, this field must be filled in manually, it is impossible to automate it – for example, a long-time client received a call, he did not answer, then the client called back and said that the project was temporarily postponed. We have outgoing and incoming calls with dates, but the “date of the last meaningful communication” field should not change – and this can only be determined subjectively. The last “red” task requires filling in the source.

Below are the positive parameters, for example, it is important for us to segment clients into those who use Bitrix24 and amoCRM. We recently added the Quality Control Discussion parameter to the technology described here. This is an example of the fact that the parameters are refined over time, as modern business is constantly changing. The QC Discussion parameter is a custom field for a list type deal, each value with its own score. Pay attention – in fact, this is a common funnel, especially lines 17-19: “offered -> Skype was -> bought”. The advantage of such a funnel is that it is a “parallel funnel”, and in a “regular” funnel we conduct requests for analytics. There is no need to single out a separate area of ​​the deal in order to offer quality control, while the main advantages of leading the client through the funnel are preserved here and taken into account, in particular, by points.

The maximum possible point for the set of ratios in example 25. This is achievable for specific won trades, while the average score will be significantly lower. 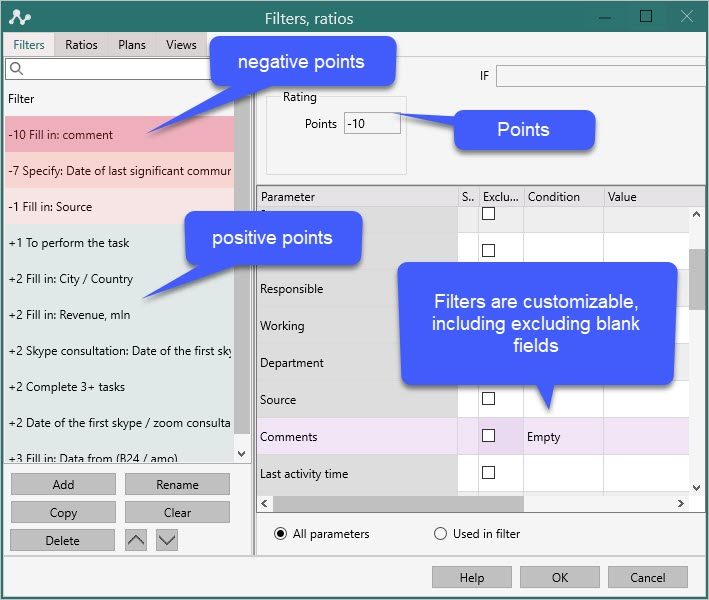 The data from the table is used to set filters and scores in the Nemind app. In the screenshot, we see red filters with negative scores, and green ones with positive ones. The manager can independently change points over time and change filters. If necessary, the robot can be supplemented with new parameters that go beyond the scope of the existing project. The filter functionality is very powerful, the screenshot shows only a small part of the possibilities. Most often, when setting up quality control filters, you need to check the (not) completeness of the field, as in this example.

The finished project file automatically changes deals in Bitrix24 / amoCRM on a schedule, for example, once a day. Let’s see what exactly is filled in CRM:

The screenshot on the left is an example from amoCRM, on the right from Bitrix24. In the customer card (here is an example for a deal), a QC group is added with fields that will be filled in automatically. “Quality” is a number; this field is convenient for sorting deals or filtering, highlighting the best and the worst. The Part Quality text box contains three blocks:

The Critical Issues block describes the items that must be followed. The use of critical parameters with negative points allows not to “litter” the detail field with unnecessary information after solving them. In the example on the left, we do not see “Critical problems” – because they are not in this deal.

Let’s consider other points: done “and” next steps “. They are based not on requirements, but on goals, therefore they cannot be” obliged to fill “in automatic mode. In the” Done “field, the achievements of the deal manager are collected. The more of them, the higher the quality of CRM management, the higher the sales manageability in the company.

The “Next steps” field is made so that the manager understands what is expected of him on this deal, how many points he will receive from each new achievement. For new employees, this allows them to quickly understand what needs to be done for each specific client.

The manager can set the task-wish once, and it will be in the customer cards, first in the “Next steps” state, then in the “Done” state. The question arises: why is the block named “Next Steps” and not “To Do”? The fact is that many tasks are technically impossible to complete, and this block is optional. But he shows what additional achievements are possible here and how they will be evaluated by the system, and therefore by the leader.

Dashboard of the quality of work in CRM. We see that Marina’s quality is lower than that of others, while she has more deals. For many deals, the critical “red” parameters have not been filled in, simply because they did not have time to fill them in, they were entered recently. For a manager, this information helps to understand not only the average quality, but also the level of workload of managers.

In Bitrix24, a dashboard is made a standard report and a link to it can be displayed in the left menu – an example in the screenshot above. In amoCRM, such a report can be seen directly in the Nemind program, or displayed in the “Lists”:

A classic problem for many sales teams, especially those with high average check, is that the manager realizes that he will not handle all customers well, and only pays attention to the largest ones, which can bring the maximum profit and, therefore, the premium. At the same time, the majority of clients of the “second level” are worked out minimally, according to the principle “if only the boss does not swear.” The manager is physically unable to offer a good quality product to all potentially useful customers, because it is overloaded. And this leads to a loss of company funds: customers leave, advertising costs are in vain.

After all, this will lead to a decrease in the count of potential “light” and large clients, and his personal premium may decrease. The quality control system solves this problem, since everyone can see the degree of workload: for which clients are working 100%, and for which only 20%. Based on the data, the manager makes a decision: are additional managers needed?

Another point is managerial. Some leaders shout at subordinates, others put pressure on authority, and still others persuade. And in all cases, it often happens that the task set by the manager is not fulfilled or is performed only at the first moment after the statement.

This is especially true for complex tasks, for example, if you need to offer a client an additional service, in which managers are poorly versed and in which they do not believe in sales. Formalize the requirements and desires of the manager, and a robot will monitor their implementation. It’s like an automatic overspeed recording system instead of an inspector.

The manager is not able to keep track of all deals, all the moments that he considers important – this is physically impossible. And the robot can. The robot identifies problems, reports achievements, suggests development paths.

The robot itself praises and scolds the manager with points and tells him how to improve the situation. The robot is made in order to remove routine control issues from the manager, to give more time to deal with business development issues.

What is the price?

Free consultation on the specifics of implementing a quality control system for your CRM.

Setting up the system by Nemind specialists costs from 50,000 rubles. When buying Nemind Enterprise for a year for 43,200 rubles, a discount is provided.

Write to us
Scroll to top